You probably remember this map of Facebook friendships, which made it’s way through the web in December 2010.

In this related article, the creator and Facebook intern Paul Butler explains the process of rendering the map. The most interesting remark he made can be found in the last sentence:

It’s not just a pretty picture, it’s a reaffirmation of the impact we have in connecting people, even across oceans and borders.

Well, there are some nice things about the Facebook friendships map. I like the colors. I like the density of information. I like the patterns. But there’s one big part of the picture missing in the map. And that’s the internet. After all, Facebook is “just” a website and websites can be accessed through the internet. So, when speaking of “connecting people, even across oceans and borders”, we should demonstrate our respect for the internet. To do so, I re-created my old map of the internet: 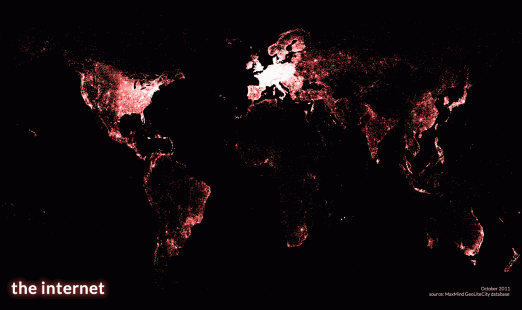 It shows more than 300k geographic locations of ip adresses, based on the free geo location database by MaxMind. Interestingly, the map shows almost the same “patterns” and complexity that is visible in the Facebook data. Given that, the remaining insight we get of the Facebook map is that Facebook is accessed by people all around the web (except for China). No big news here.